From Data to History

There may not be traditional histories of Homestead's Jewish community, but there are tens of thousands of surviving records that trace the lives of its members. Through the power of technology, I've been able to compile and mine this data for the many stories it tells. Here are a few!

More are in the works! Ideas? Please let me know!

Trends in membership of the Homestead Hebrew Congregation

Below are three different version of the same bar graph showing the number of synagogue members per year, 1894-1993. They reveal dimensions of the synagogue's history only hinted at by the surviving records.

2. Synagogue members by relationship to other members

In this version, purple indicates what I call “first generation” members – people without any preexisting connection to the community.

Each person who arrives in the community has the potential to seed multiple generations of members.

When we look at the other colors in this version of the bar graph, we see why this is important. Orange are children of earlier members who grew up and joined. Turquoise are people who joined after marrying children who grew up in the community. And so on. When the purple part of the graph shrinks – when new people fail to move to Homestead and put down roots there – the community loses out at that moment and in the future.

3. Synagogue members by place of residence

Red, however, means the member lived nearby in Pittsburgh, and the other colors are places further afield. These are what I call “legacy” members – whether retirees or grown children – who retained their loyalty to their family congregation, but who lived their daily lives in probably a larger Jewish community with many more Jewish options. These members did not beget more members. Their children knew their families were from Homestead, but they did not affiliate with the Homestead synagogue. They invested in the community in which they lived.

If you look closely, you’ll see that in 1950 the number of members residing in Homestead dipped below 50% for the first time and continued to drop from there. The number of legacy members came to dominate the overall membership.

With this graph and the previous one, we see that even before the community hits its peak, the trends that would be its undoing were in place. New Jewish families were not moving to Homestead, and existing Jewish Homestead families were not staying.

AP: What made some people stay here, versus the ones who moved and just came back to take care of their businesses?

Florence Stahlberg Hiedovitz: I think some had family here, and wanted to stay with their family. And others looked toward the future and knew that it would never be, that it had peaked, and for their children and grandchildren they wanted a more Jewish environment such that Squirrel Hill or East End offered them.

FH: Well, it was very personal. It depended on their family essentially, if their property was all purchased, if their business was gone, and if it's a situation – well, Harold's father, for example, he had a business, and he had property, and it was gone (TAH: as a result of the 1941 steel mill expansion). Well, there was no reason for them to stay here in Homestead.

As we trace the migration of Homestead's Jews to Homestead Park, we are also seeing the effects of changing religious observance. Traditionally observant Jews will only walk to synagogue on the Sabbath or holidays. Homestead Park's Jewish families, headed by younger people, drove to synagogue. These oral histories, connected to families whose kids grew up in the 40s, 50s, and 60s, give some context:

AP: The shul was too far for you to walk to right? Generally speaking?

Irwin Gross: Generally speaking it was. But in the 40s, there were some people, including the Weinbergers, who would walk down and would walk back. But eventually they started to drive.

AP: So, on the holiday, the major holidays, on Rosh Hashanah and Yom Kippur, were there, in most of the time when you were involved, were there people who were driving to shul?

IG: People who lived out in the Park almost always drove to the synagogue. People who lived in Homestead or Munhall, close to the synagogue, would walk. Like we had a rabbi who decided he was not going to live in Homestead, he was going to live in Homestead Park, and he was told, “You know it’s a long walk, and I’m sure you wouldn’t want to walk.” “Oh,” he says, “No problem, no problem.” But there were times where he didn’t show up especially in bad weather because he didn’t walk, he didn’t drive.

AP: So for example the High Holidays, when you were going to Shul, did [your family] walk from Homestead Park?

Ruth Stein Halle: No, we rode. We drove, we drove. As far as that part of it, the religious part of it, we drove and drove back home again, but, no, but we did not walk.

The dynamic map of where Homestead's Jewish residents lived 1890-1945 makes it easy to visualize when and how the traditional observance of only walking to synagogue faded as Jews spread beyond the Ward in Lower Homestead. 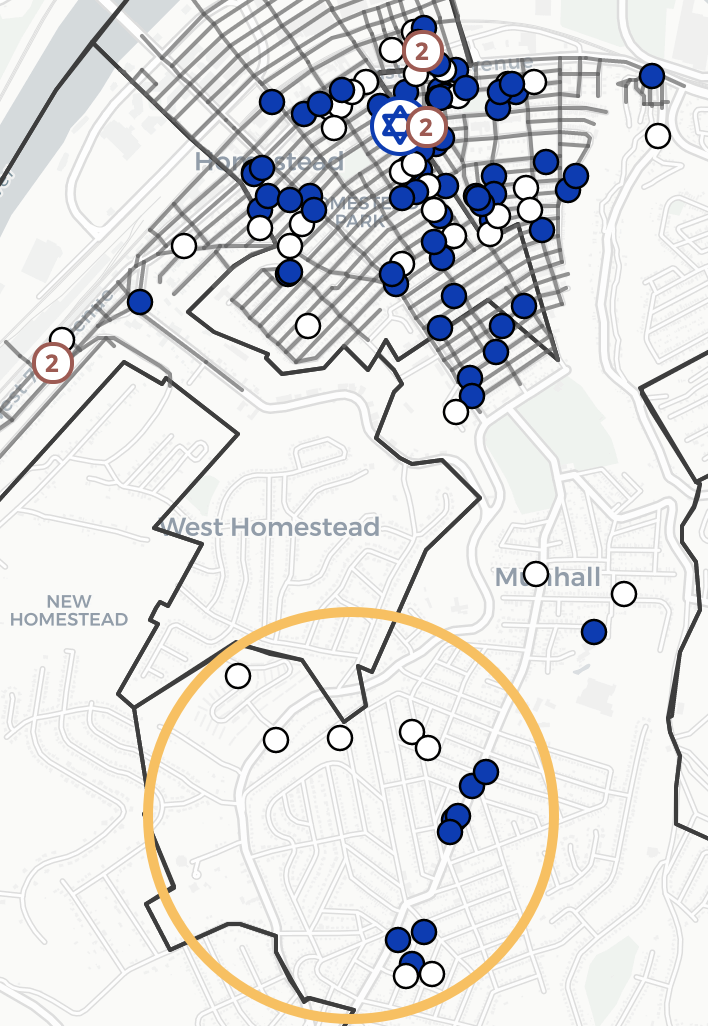 The static image above, color-coded by synagogue membership, shows where Jewish families in 1945 in relation to the synagogue (indicated by the star). Note how many synagogue members (in blue) lived in Homestead Park (circled in orange).

Further research is underway to trace Homestead's families beyond the artificial 1945 cut-off imposed by the city directories. This Google map shows where families who sent their kids to Homestead's Hebrew school in the 50s and 60s lived.

Members vs. resident non-members of the Homestead Hebrew Congregation

This bar graph connects synagogue membership data with census data to suggest what percentage of Homestead's Jewish residents who could have been member of the town's synagogue were. There are plenty of issues with the data in this graph, from the significant undercount in the 1900 census, to difficulties in defining who is even a male eligible for synagogue membership, anyway, so this data is merely directional best. (The gray numbers indicate what percentage of Homestead's residents were Jewish.)

This graph shines light on a perennial problem in the synagogue. A person was not required to join the synagogue to make use of it, but without a sufficient dues base, the synagogue could not sustain its activities. In October 1923, for example, the synagogue appointed a committee “to work out ways and means to make outsiders pay for benefits derived from the Congregation.” Again in summer 1939, under the membership committee, a “list of prospective members [was] prepared [and a] campaign conducted to increase membership.” At that time the committee found “78 Jews in Homestead who are not members of the Congregation.” The meeting minutes noted that “efforts are being made to interview prospects,” but as earlier graphs showed, there doesn't appear to have been much success in recruiting them.

Further research is underway to identify how many of the non-members attended Homestead's synagogue or attended synagogue elsewhere.

By mapping where the Jewish community lived in Homestead at the time of the famous 1892 labor dispute, I have revealed a surprising dimension to some of the most famous images from that historic summer. 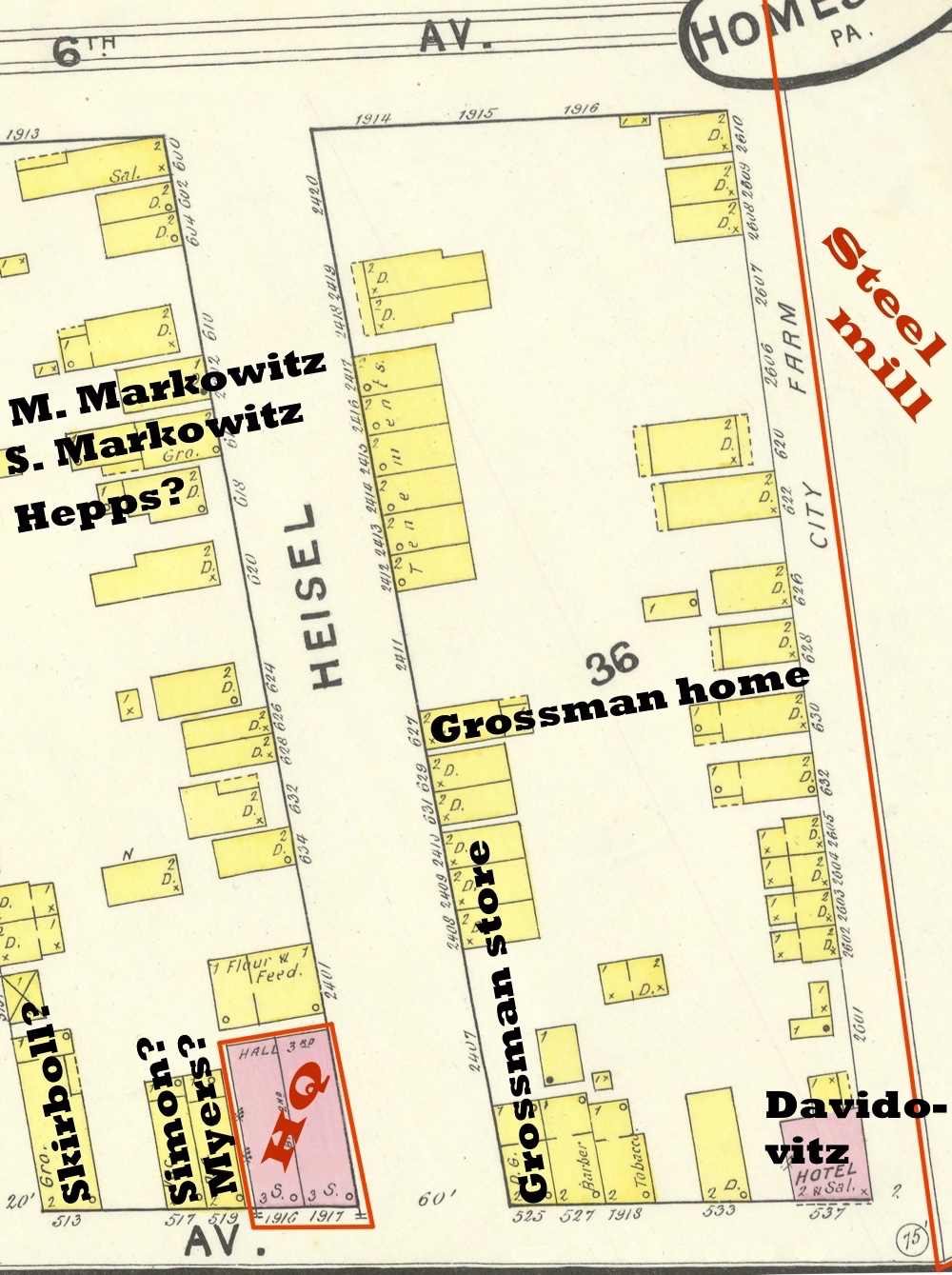 HQ indicates the Bost Building, which was the headquarters of the union during the strike. It was also where the many visiting journalists worked. (Today this building is the visitors' center for the Rivers of Steel National Heritage Area.)

The hill across the street (not shown in the map) is where the militia encamped for four months while the town was under martial law. (Today the Carnegie Library of Homestead occupies this hill.) This famous photograph captures the scene: 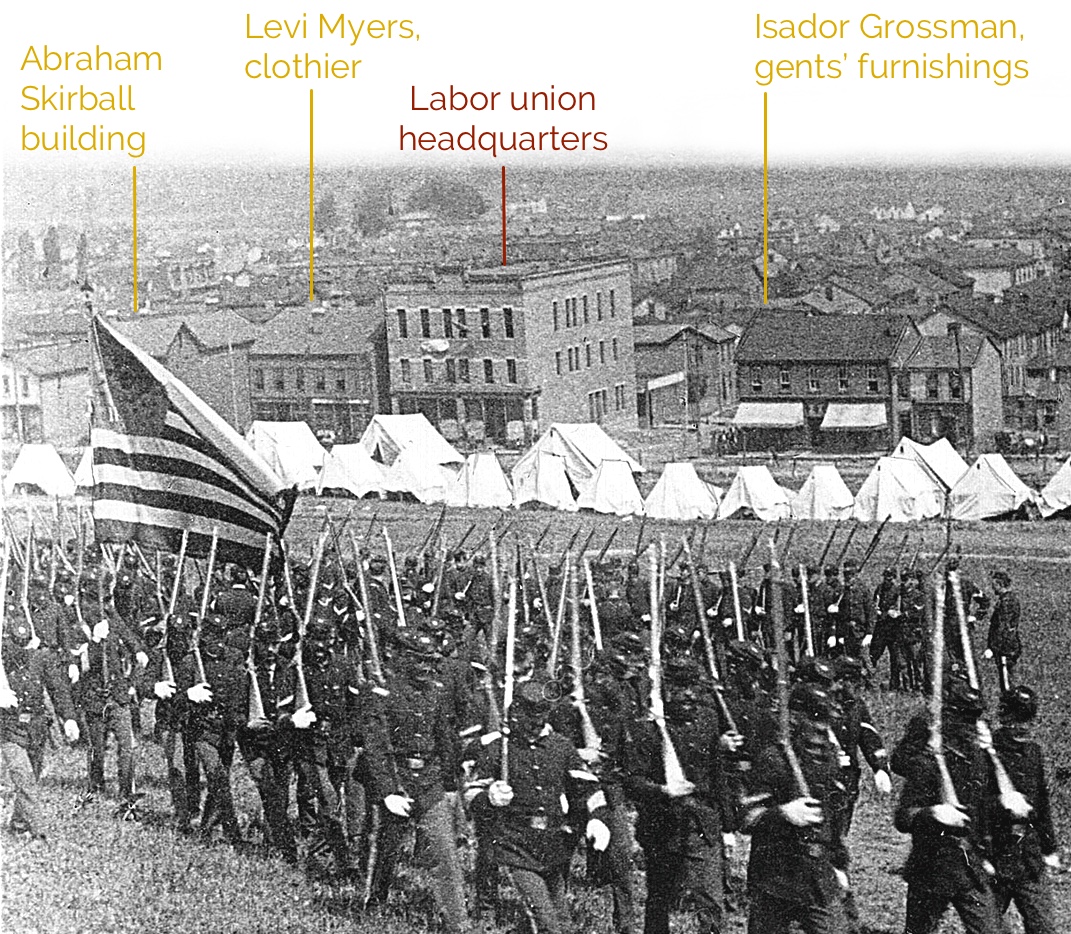 And this widely-circulated drawing shows the headquarters' building (note the flag and telegraph wires) with the militia milling about on the street (Harper’s Weekly, July 16, 1892). Is that Isadore Grossman in front of his store? 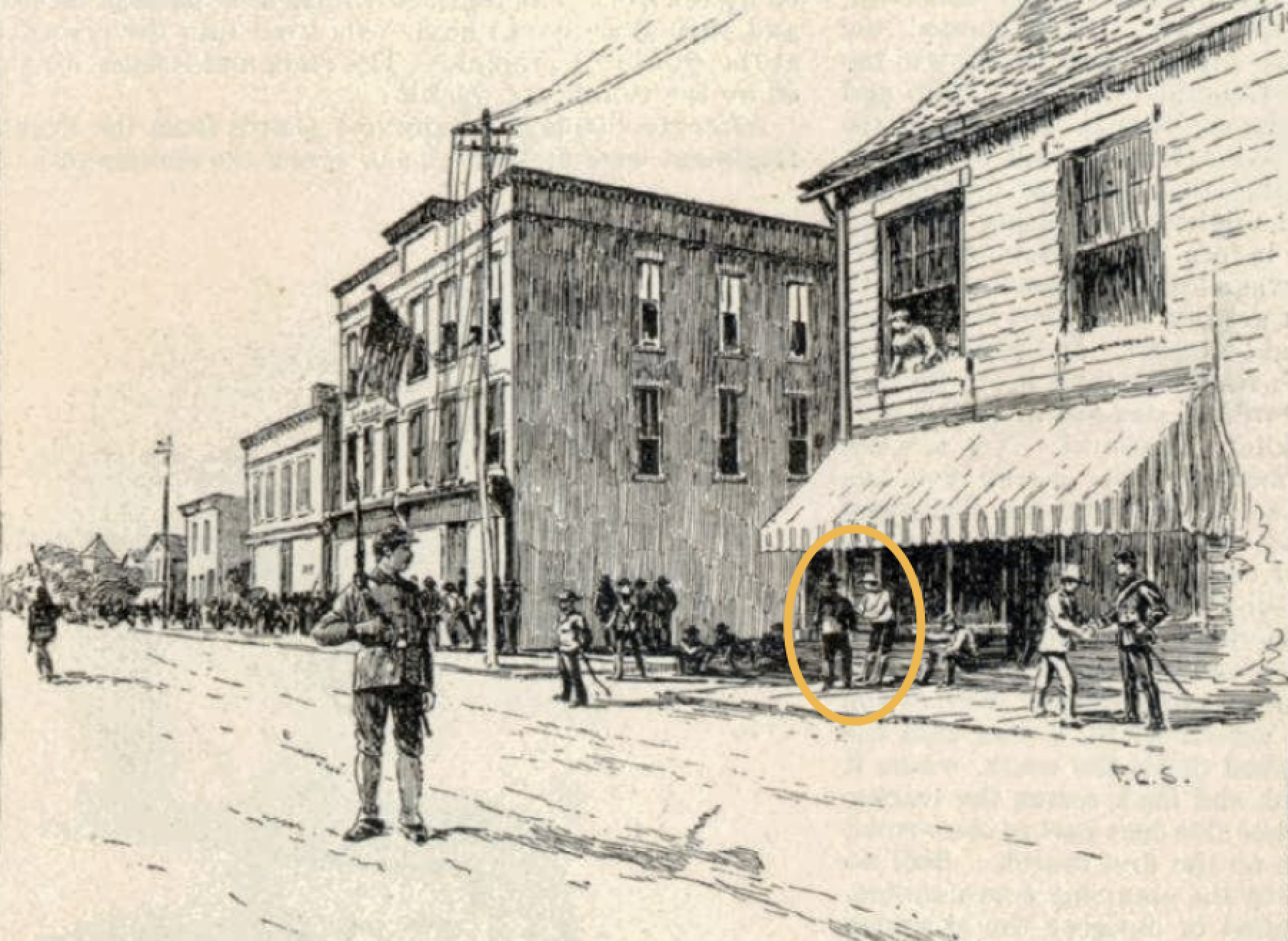 From 1892 ‘til now, the people who studied this labor dispute have seen these images and not realized everything that these images represent. Jews were present at the time of the strike and located proximate to key events. They did not work in the mill at the time of the dispute, but they were affected secondarily as residents of a town under martial law and as peddlers and shopkeepers selling on credit to a town full of out-of-work men.

(Full, interactive map here, and more reflections on the relationship of Homestead's Jewish community to the labor dispute here.)